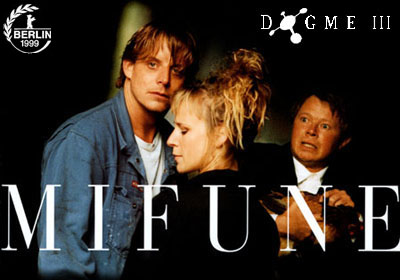 – You can’t lie your way out of the past

That’s the basic philosophy behind Søren Kragh-Jacobsen’s new film. Kresten (played by Anders W. Berthelsen) lives in Copenhagen yuppie circles with the prospect of a glittering carrer until he recieves a phonecall on his wedding night. From the depths of the country he hears that his father has died. He has trouble explaining the situation, as he has told everyone, including his wife Claire (Sofie Gråbøl later known for the Killing

), that he had no living relatives. He returns to his father’s dilapidated run-down farm and comes across his elder brother, Rud (Jesper Asholt), a lonely seedy simpleton quite unable to fend for himself.

Kresten is embaressed by the prospect of having his poverty-stricken redneck past unveiled, and keeps his wife at bay with one lie after another. But the feelings that well up in him on his reunion with Rud inspire a desperate plan: To enable his return to his gilded city existence he advertises for a housekeeper to look after his brother. But when beautiful Liva (Iben Hjejle) arrives, everything is turned upside down. Because Liva isn’t who she pretends she is either.

With a highly suspicious on her way to the farm, a nutty brother in the back garden, old enemies in the farmyard, and a lovely lady in the bedroom, Kresten’s problems begin for real….

“it’s liberation from the way a director can be raped by technology, the fact that you can be tyrannised by all the expensive gear, by the cranes, filters, dollies and spotlights; in that area we can’t beat the americans anyway, so we europeans should head in another direction.”

Music played on a bent drain-pipe? Along creative, untraditional lines when you are shooting a Dogme film

. According to the ten strict rules of DOGME 95, drawn up by the two Danish directors Lars von Trier and Thomas Vinterberg four years ago and now dubbed a “vow of chastity”, the music has to be recorded along with images. Naturally, Søren Kragh-Jacobsen has obeyed this rule while making Mifune – just as he has faithfully adhered to the other Dogme commandments, which include the mandatory use of handheld cameras, a ban on artificial lighting and props brought in from off set, and insistence on a plot that takes place here and now without containing superficial action by way of guns or murders.

“When Lars and Thomas asked me if I’d like to make Dogme 3, I had no doubt that I’d agree to”, the director says. “At the time I thought I’d lost the spontanity that had always fuelled me, and I thought I’d become more and more caught up in the technical aspects of film-making, so when I was asked to join the Dogme Brotherhood my only stipulation was that there should be film in the camera.”

Since the qualified electrical engineer made his convincing debut in 1978 with Do You Wanna See My Beautiful Navel, Søren Kragh-Jacobsen has made a succession of features including Rubber Tarzan, Kingfisher, Shadow of Emma, The Boys from St. Petri and most recently, The Island on Bird Street, the international co-production which recieved its world premiere at the Berlin Film Festival, like his new film, Mifune, about which he says:

“At first I had no idea where I was heading with this project. Lars knew where he was going when he started on The Idiots, and I envied him. But making films can be a pretty lonely business, and Dogme 95 had a subtext – things should be a bit more sociable – and that’s how they turned out. In the meantime I threatened to make a film in a major key, because I wanted to acknowledge my own triteness.”

The idea for the Danish title [ literally “Mifune’s last song

“] came to Søren Kragh-Jacobsen when the great Japanese actor Toshiro Mifune died in 1997. In The Seven Samurai by Akira Kurosawa

, Mifune played a bogus Samurai of peasant origins: there is a parallel here to the lead in Mifune – the succesful careerist who keeps his redneck past a secret from his fashionable Copenhagen surroundings.

When Kresten learns of the death of his father he is forced to return to the rundown family farm and to Rud, his retarded brother. Most of Søren Kragh-Jacobsen’s film was shot in six weeks on an abandoned farm situated on the featureless flatness of Denmark’s southern most island; the film unit slept in caravans and the cast brought their own clothes to wear on camera

. Søren Kragh-Jacobsen says he wanted to make Mifune somewhere not used to film units; Copenhagen, where most Danish films and television series are shot, is getting pretty tired of them.

“The script wasn’t finished until four days before shooting was due to start, and that suited us just fine”, Søren Kragh-Jacobsen says. “I wanted to get away from contrived drama, back to the family and the small-scale play; I wanted to make an affectional, optimistic, summer film.”

In fact it rained most of last summer in Denmark while Søren Kragh-Jacobsen was shooting Mifune, but the weather has lent his film a highly expressive visual style he is very happy with. Unlike The Idiots, Lars von Trier’s Dogme film, Mifune was not shot on video, because although video allows the director to shoot far more longer takes to work on in the editing suite, Søren Kragh-Jacobsen did not think that this technique suited the story he wanted to tell – neither does he consider that there is anything revolutionary per se in the use of handheld cameras.

“Of course I could have made a Søren Goes Absurd – but I am not Lars von Trier”, he says. “I am a realist , a story-teller, and I have stayed within my own tradition and kept to the Dogme rules at the same time. They did not prove to be a straitjacket in any way; on the contrary; it was the most purifying film-making experience I’ve had since Rubber Tarzan.”

He admits with a smile that he has bent the property rule a little – for the sake of the cameras he pruned a few bushes in the overgrown farm garden and purloined a couple of chickens from the farm next door. But he is delighted with Dogme 95 as such.

“Well, it has turned out to be a superb commercial step, even though it wasn’t conceived as such. But it’s liberation from the way a director can be raped by technology, the fact that you can be tyrannised by all the expensive gear, by the cranes, filters, dollies and spotlights; in that area we can’t beat the Americans anyway, so we Europeans should head in another direction.”

Søren Kragh-Jacobsen wrote the script for Mifune, with help from professionel Script-doctor Mogens Rukov and the young director and writer Anders Thomas Jensen, who is more of an age with the leading characters than Mifune’s own director. Besides Kresten and his retarded brother Rud, they include Kresten’s wife Claire – they are newly-weds – and the attractive Liva, whom Kresten employs as housekeeper at the farm. She is on the run from parlous existence as a classy hooker in Copenhagen, but she doesn’t let Kresten in on this, and in Søren Kragh-Jacobsen’s own words, the film is about “People who are full of lies”. But they are equally full of humour.

The Danish director wanted to show Kresten watching his favourite film, The Seven Samurai, on video. But Although Søren Kragh-Jacobsen went as far as getting in touch with the wife of the now deceased Kurosawa, who answered at the time that “the master is tired”, it proved impossible to show any scenes from the Japanese masterpiece. Toho, the company that own the rights, vetoed the idea, apparently because of hostility between Kurosawa and one of Toho’s senior executives, Søren Kragh-Jacobsen believes. But nevertheless, Jacobsen is pleased with the title of his film, because he thinks that “Mifune” is a word that feels good in the mouth, “and tastes just like a boiled sweet”.

The Idiots (Lars von Trier) and The Celebration (Thomas Vinterberg) have both generated great interest internationally, and you might think that Søren Kragh-Jacobsen was a touch nervous at the prospect of following them with the third Dogme film. But that is not so. “No, I feel fine about it, because I’m to old to be intimidated by that kind of thing. As a director you sense quite clearly whether something has worked or not, and I am no more nervous than normal before a premiere.

With regard to Lars and Thomas I think we’ve joined hands, and what matters most about the Dogme films is peeling away the layers until you get to a good story. Films don’t absolutely have to be all wham, bam and dead babies,” Søren Kragh-Jacobsen says.